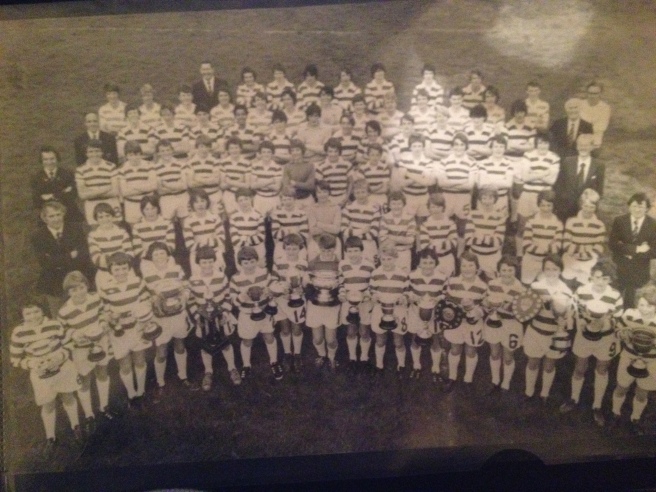 This picture was taken around 1980. It shows all Celtic Boys Club teams from under 12’s to under 16’s plus some of the under 18’s in the back row. I was having a conversation with a coach recently and we were comparing training methods of the time. Our memories weren’t great but we both agreed it was pretty basic back then. Lots of running laps, lots of sprints and maybe a game at the end. However, here is the reason for the picture. We still produced some great players. It  has to be said that Celtic BC probably attracted most of the talent in the West of Scotland. They were a big name and there was actually a pathway to the first team back then. It is probably the equivalent of today’s academy set-up. In the picture alone there are the likes of Charlie Nicholas, Davie Moyes, Pat Nevin, Jim McInally, Tosh McKinlay and Peter Grant who played at the highest level. There are many others who played at a good level professionally. From my own team (front row) notably Chris McCart (Motherwell) and Jimmy Boyle (Airdrie) were the ones who made a career in senior football.

So here’s the rub. Today’s grassroots club’s are far more organised. Coaches are better qualified. Facilities are still not great but probably better than back then yet we still don’t produce the players that this country requires. My own club has over 270 boys/girls playing football. We have training facilities with floodlights and indoor facilities available (still insufficient but that’s a story for another day). So what would success look like for us. Can we produce a player/players that go on to the professional game? Can we instill a love of the game that never leaves players? Can we make better people by playing for our club? Do we want to have winning teams? Do we want to grow a club who are respected within the community? Or is there something else?

My own personal view is that I want to create an ‘Our Club’ philosophy. I have spoken to many people about this. Both inside and outside the club and sought advice from some great coaches, in particular, my ‘go to’ coaches Tom Statham, John Davies, Wayne Harrison, Richard Dalton plus SFA Development coaches like Alan Morgan and Scott Kinross to name but a few. I am highly indebted to all of these guys. The ‘Our Club’ approach takes a lot of the good practice going on out in grassroots level of football and encapsulates it in a club ethos. In my perfect world a lot of the following would be present:

If we get all this going then we could create something quite remarkable. Just maybe this might result in producing players for the country but the fall back will be that we will always produce ‘good people’

Clearly the picture shows some great football players and that was the aim of Celtic BC at the time. We are not a Celtic BC. We are a grassroots club and while we may be able to produce the odd player who will go onto the senior ranks (and that would be a fantastic achievement). We are more about producing better people who will go onto succeed in whatever their future entails. The irony is that we may never see this outcome as it may be 10-20 years before that tree bears fruit. To quote John Wooden:

If we can do this and proudly say we were part of DSC then maybe some day in 35 years time someone will post a picture of your team.

PS I am in the front row if you can spot me?

4 thoughts on “‘Our Club’ Approach”