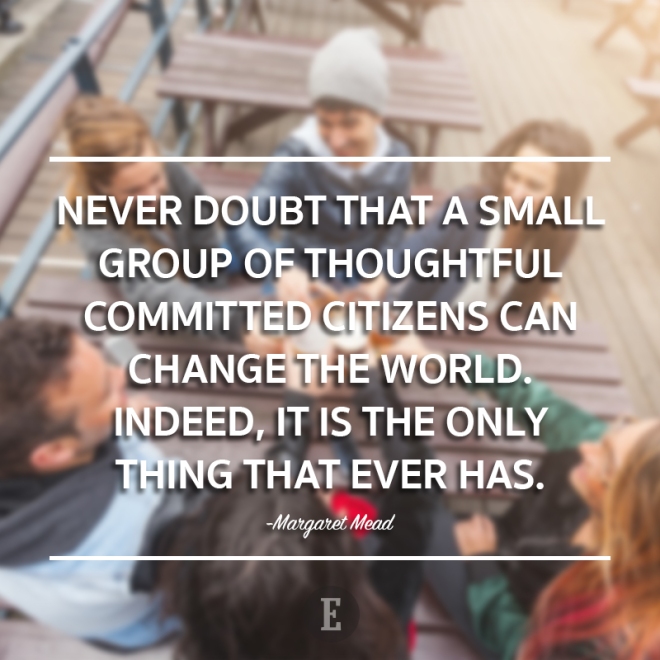 Margaret (Meg) Wheatley famously said “Whatever the problem, community is the answer”. In the present time where we have had the shocking scenes from the Grenfell Tower fire; the General Election; Brexit; terrorist attacks; Trump as POTUS it is safe to say we are living in crazy times. We have seen that the authorities (or the establishment) are maybe not the ones to be leading us in this uncertain world. They have fooled us all into a way of thinking that has used the ‘Corporation’ to be king above all else. It uses authority, competition, power, profit, bureaucracy to produce a mechanistic world where the subordinates are controlled and people are moulded into self-centred, materialistic, money grabbers buying more and more stuff to generate the economy while at the same time trashing the planet.

So a very dark picture is emerging but I am sick of focussing on all this as we see it 24/7 on every news channel we watch. We need to change the paradigm and the only answer I see is COMMUNITY!.

When we talk of community it conjures up a different picture. We think of volunteers, meaning, neighbours, social responsibility, part of a team, fun, involvement, helping others. In summary, something bigger than ourselves.

Communities have existed for thousands of years while corporations have only really been here for the last few hundred. However the pendulum appears to have swung too far towards corporations (and the associated problems) at the expense of communities. Don’t get me wrong we need both but there is currently a dire need for some system correction.

Time to pause…..This might seem a bit odd to be talking about such big issues on a blog that focuses on youth football development but the same issues are reflected in our game. Subsequently I can see some hope in our game and for the society in general.

I am proud to be part of a real community club. We represent the local community of around 10,000 people. The vast majority of players and coaches live in Dunblane but our doors are very much open to people from outside the town. It’s not just a bunch of people thrown together. We are a bunch of like-minded people with a common aim. Community, by it’s very nature is about sharing. We aim to share and help each other. It is not about one person or one team but it is about building a club which stands for something. We aim to get as many playing as we possibly can, for as long as possible. If we can develop players as individuals and as footballers then we are making a difference.

Looking at it from the wider lens of the issues I mention above then if we fall into the ‘corporation’ mode then we will have coaches who are only interested in themselves (self-centred). We will have coaches chasing trophies above all else (materialistic). We will lose the game we love by letting commercialism take over. This will just put us on the same trajectory as the rest of society. Therefore we have a chance to uphold our values by sticking to what we believe is right. Care in our community. Strength in togetherness.

Let’s set the standard for a new future. Together, as one, as a community. Helping each other to get better. Protecting the weak and challenging the strong.

We need to build the C’s of Community:

Remember (as in life), you can’t play football alone. You need to be part of a team, a squad, a club, a community. What better way than playing with your best friends and creating memories to last a lifetime.

The best clubs have the feeling of community. Can we lead the way for the rest of society to follow. This is my hope. This is our strength.

Without doubt, community is the answer.

Community Is The Answer